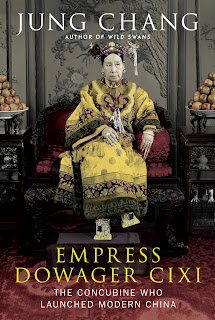 * Empress Dowager Cixi was a powerful and charismatic woman who unofficially but effectively controlled the Manchu Qing Dynasty in China for 47 years, from 1861 to her death in 1908. Known as the 'Dragon Lady,' she had Saturn rising in Scorpio (as did 'Iron Lady' Margaret Thatcher). If we take at face value the time of birth of "four o'clock in the morning" given in a biography, then CiXi had 29° Libra rising. And indeed, she was adept at consolidating her political power through the manipulation of her close relations.

An imperial concubine in her adolescence, Cixi gave birth to the emperor's son, known as the Tongzhi Emperor, in 1856. On the emperor's death in 1875, she ousted a group of regents appointed by him and assumed regency over the Tongzhi Emperor. Cixi then consolidated control over the dynasty when, at the death of her Emperor son, contrary to the rules of succession, she installed her nephew as the Guangxu Emperor in 1875. She died a day after Guangxu.

BIRTH DATA: CiXi, 29 November 1835, 04:00 (4 a.m.) LMT (-7:45:40), Beijing, China (39n55, 116e25). ASC: 29 Libra. RR: B (from biography). SOURCE: Sy Scholfield (©) quotes Harry Hussey, Venerable Ancestor: The Life and Times of Tz'u Hsi, 1835-1908 (New York: Doubleday, 1949), p. 1: "The place was one of the old sections of the Tatar city of Peking, out near the Hsi Chih Men, the gate in the northwest corner of the city, where the poorer Mongols and Manchus lived. The time was the Double Tenth, the tenth day of the Tenth Moon of the fifteenth year of the reign of Tao Kuang, November 28, 1835, as the Western peoples reckon time. It was the Hour of the Tiger (four o'clock in the morning) ― the hour in in which so many people are born and so many die in China. . . . A child was being born to the Manchu woman and Grandfather Wong was much worried." NB: Hussey seems to have calculated the wrong day, as current references give 29 November. See for example, an online Chinese calendar converter (http://www.asia-home.com/china/sollunar.php) and Marina Warner, The Dragon Empress: Life and Times of Tz'u-hsi 1835-1908 Empress Dowager of China (Random House, 2012): "Tz'u-hsi was born Lan Kuei (Little Orchid) in 1835, on the tenth day of the tenth moon, which fell that year on 29 November."