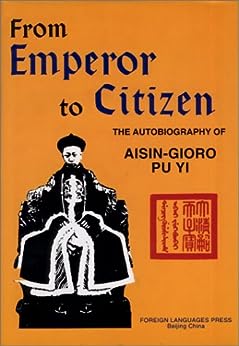 * Puyi — the twelfth and final ruler of the Qing Dynasty and the last Emperor of China — had the North Node conjunct the MC both in royal Leo, opposed and ruled by the Sun on the South Node and IC — all in anti-royal Aquarius. The Sun was trined from the 8th house by Pluto, the ruler of his Scorpio Ascendant: PuYi was a prisoner of power, ruling in name only and ultimately powerless. Chosen by Empress Dowager Cixi (see her chart) on her deathbed, PuYi ruled as a child emperor, 1908-1912, as a nominal emperor in 1917, and as the emperor of the Japanese-controlled puppet state of Manchukuo, 1934-1945. After the People's Republic of China was established in 1949, Puyi was imprisoned as a war criminal for 10 years and wrote his memoirs.