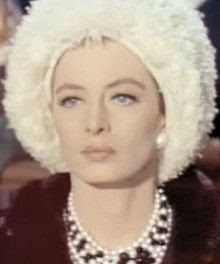 * Capucine - the beautiful comedienne - was best known for her comedic roles in the feline-titled films, The Pink Panther (1963) and What's New Pussycat? (1965). Funnily enough, she had cinematic Neptune in Leo, the sign of the Lion/ess - without close aspects - except for a square to lovely Venus in side-splitting Sagittarius which ruled her Taurus Ascendant. Tragically, a quarter century after she hit the heights of stardom, Capucine jumped from her eighth-floor apartment to her death. Perhaps her suicidal fall was a symptom of her Capricorn Sun on the MC opposite Pluto on her IC?

Many thanks to Marc Brun for sending me her birth certificate.

In her teens, she became a fashion model, working for fashion houses Givenchy and Christian Dior. She adopted the name, "Capucine" (French for nasturtium). She met Hollywood actress Audrey Hepburn modeling in Givenchy (with whom Hepburn was best friends and whose muse she was) in Paris. The two would remain close friends for the rest of Capucine's life.

On the set of Rendez-vous (1949), she met Pierre Trabaud; they married the next year. The marriage lasted only eight months, and Capucine never married again. She met actor William Holden in the early 1960s. They starred in the films The Lion (1962) and The 7th Dawn (1964). Holden was married to Brenda Marshall, but the two began a two-year affair. After the affair ended, she and Holden remained friends until Holden's death in 1981.

On 17 March 1990, Capucine jumped from her eighth-floor apartment in Lausanne, Switzerland, where she had lived for 28 years, having reportedly suffered from illness and depression for some time.

Screenshot of Capucine from the trailer for the film The Pink Panther, 1963.