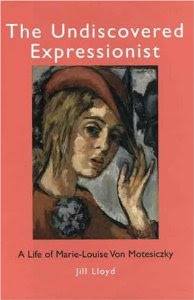 * During the Nazi annexation of Vienna in 1938, Marie-Louise von Motesiczky and her mother fled her homeland of Austria to seek refuge in London where she would be based for nearly six decades, working among other exiled artists. As an artist-foreigner, she embodied the archetype of her Venus in Sagittarius. With her Sun rising at 29° Libra, it was only at the end of her life that Motesiczky gained recognition as one of Austria’s most important 20th-century painters. Her biography is titled "the undiscovered expressionist": Venus, as ruler of her Sun and Ascendant, is unaspected except for a restrictive square from a retrograde Saturn. WIKIPEDIA BLURB

Marie-Louise von Motesiczky was born in Vienna to an aristocratic family. As her family included Jewish descent, she had to flee the Nazi annexation of Vienna in 1938. Motesiczky, accompanied by her mother Henriette, fled to London. Following the end of the war, Motesiczky exhibited her paintings in many European institutions and she continued to work from her house in London, where she lived only with her mother and a single maid. Motesiczky's major breakthrough in the UK occurred in 1985, with a major retrospective at the Goethe Institute in London, which generated much acclaim and saw her reputation as a major Austrian artist cemented. She died in London on June 10, 1996.

BIRTH DATA: Marie Luise Josefine Alice von Motesiczky, 24 October 1906, 06:00 (6 a.m.) CET (-1), Vienna, Austria (48n13, 16e20). ASC: 24 Libra. RR: B (from biography). SOURCE: Sy Scholfield (©) quotes Jill Lloyd, The Undiscovered Expressionist: A Life of Marie-Louise Von Motesiczky (Yale University Press, 2007), p. 31: "Marie-Louise von Motesiczky entered the world on 24 October 1906, when Vienna was basking in a fine Indian summer. Henriette was feeling so well in the days preceding the birth that she even spent an evening at the theatre. Edmund, who had been enjoying the hunting season at Vazsony, returned to Vienna just in time; a few hours after Henriette collected him from the station, the doctor was called, and by six o'clock the following morning, Marie-Louise was born. . . On Marie-Louise's baptism certificate into the Evangelical Church, her name is recorded as Marie Luise Josefine Alice von Motesiczky."