* In the chart of Charles Blondin - called the "Chevalier Blondin", or more simply "The Great Blondin" - we find a classic bucket shape with bold-and-brave Mars in Libra (the sign of Balance) as the handle. Blondin was the most famous tightrope walker of the 19th century. The first to walk a rope across the Niagara, he performed around the world: in London, Dublin and Sydney. For his signature act he would cook an omelette midway along the tightrope and then eat it (or offer it to his audience) while drinking a glass of champagne. How very French! How very death-defying Pluto in the 8th at the apex of a T-square (ruled by a daredevil Mars bucket-handle in sextile with an Ascendant in show-off Leo)! WIKIPEDIA BLURB 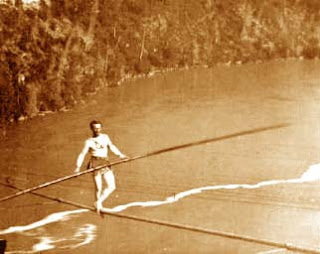 Charles Blondin won worldwide acclaim when he crossed the Niagara Gorge (located on the American-Canadian border) on a tightrope, 1,100 ft (340 m) long, 3.25 in (8.3 cm) in diameter and 160 ft (49 m) above the water, on 30 June 1859, and a number of times thereafter, always with different theatrical variations: blindfolded, in a sack, trundling a wheelbarrow, on stilts, carrying a man (his manager, Harry Colcord) on his back, sitting down midway while he cooked and ate an omelet and standing on a chair with only one chair leg on the rope.

During his lifetime, Blondin's name was so synonymous with tightrope walking that many employed the name "Blondin" to describe others in the profession. For example there were at least five people working with variations of the Blondin name in Sydney in the 1880s, the most famous of whom was Henri L'Estrange - "the Australian Blondin".

Charles Blondin died of diabetes at his "Niagara House" in Ealing, London on 22 February 1897, aged 73.