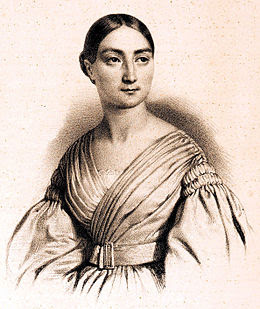 * Biographies give Cornélie Falcon's year of birth as 1812 or 1814, while her place of birth is stated as the town of Le Monastier sur Gazeille in the Haute-Loire département in south-central France. However, a simple check of the birth records shows that she was born at rue du Béthizy, n° 10, quartier Saint-Honoré in Paris in 1814. Her Gemini Ascendant was ruled by Mercury in Capricorn. Like the Goat that scales mountains, her voice could climb from low A-flat to high D. WIKIPEDIA BLURB

Cornélie Falcon (28 January 1814 – 25 February 1897) was a French soprano who sang at the Opéra in Paris. Her greatest success was creating the role of Valentine in Meyerbeer's Les Huguenots. She possessed "a full, resonant voice" with a distinctive dark timbre and was an exceptional actress. Based on the roles written for her voice her vocal range spanned from low A-flat to high D, 2.5 octaves. She and the tenor Adolphe Nourrit are credited with being primarily responsible for raising artistic standards at the Opéra, and the roles in which she excelled came to be known as "falcon soprano" parts. She had an exceptionally short career, essentially ending about five years after her debut, when at the age of 23 she lost her voice during a performance of Niedermeyer's Stradella.