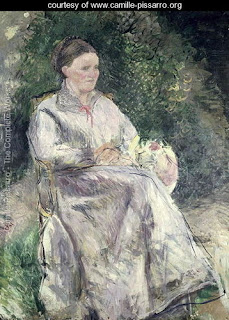 * Julie Vellay, who was the mistress, then the wife, of the painter Camille Pissarro (known as the "Father of Impressionism"), also posed for him. As the devoted mother to their brood of children, she had the Moon in the domestic 4th House on the IC. Her Moon was in artistic Pisces under trine from Saturn in Scorpio on her Ascendant: They had eight children, one who died at birth and one daughter who died aged nine. The surviving children all painted, and Lucien (see his chart), the oldest son, became a landscape artist. Biography

Julie Vellay, the peasant daughter of a vineyard grower, was employed as a maid in the household of the mother of Camille Pissarro (1830-1903). Vellay became his mistress in 1860 and they were married in London in 1871 while she was pregnant with their third child. After returning to France later that year they lived outside of Paris in Pontoise and later in Louveciennes, both places inspiring many of his paintings including scenes of village life, along with rivers, woods, and people at work. Julie Pissarro died, aged 87, on 16 May 1926 in Éragny, Oise, France.