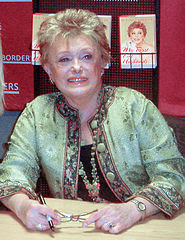 * Rue McClanahan's birth certificate has been published on the official website of her estate, showing the time of birth recorded as 7pm and her name as "Eddi-Rue McClanahan." Previously, Frank Clifford quoted a written form filled in by her, with a time of 7:30pm from her mother's memory.

The time of 7pm puts Neptune and the Moon very close to the Ascendant and MC respectively. McClanahan won an Emmy Award for Outstanding Lead Actress in a Comedy Series in 1987 for her role as Blanche Devereaux on The Golden Girls (1985–1992).

Thanks to Susan Carmichael for finding the BC.

Previously, Frank C. Clifford quoted a written form filled in by her, on 20 June 1995, with a time of 7:30pm from her mother's memory.