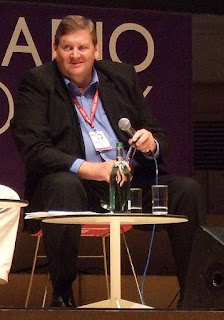 * John Myers is the Chairman of the UK Radio Academy Awards, Executive Chairman and owner of Myers Media and the former Chair of The Arqiva Commercial radio awards. Myers developed the Century Radio brand for Border Radio Holdings in the early 1990s, launching two more stations later in the decade. He presented programmes under the pseudonym "John Morgan". He then became Chief Executive of GMG Radio, developing the Real Radio, Smooth Radio and Rock Radio brands and overseeing GMG Radio's acquisition of the Century network from GCap Media. He served as Chief Executive of The Radio Academy from April 2011 until June 2012.

In 2009, he was asked by the Labour Government to produce a report on the future of local radio in the UK ("The Myers Report") which was published by the Department for Culture, Media and Sport in April 2009. A number of his recommendations were taken up by the Digital Economy Act 2010, leading to, amongst others, mergers within the Heart and Smooth Radio networks. Myers reviewed efficiencies at four BBC radio stations during the first quarter of 2011 and, in late 2011, began reviewing BBC Local Radio stations in response to the Delivering Quality First cuts.

He is currently chairman of TeamRock, a new worldwide content and distribution business based in London and Glasgow.