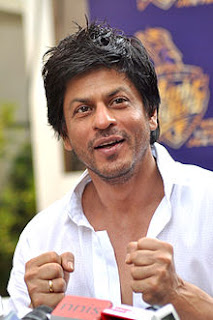 * Shah Rukh Khan also known as SRK, has been nicknamed in the media as the "Baadshah of Bollywood," "King of Bollywood" or "King Khan", having appeared in more than 80 Bollywood films, and earning numerous accolades, including 14 Filmfare Awards. Khan has a significant following in Asia and the Indian diaspora worldwide. In terms of audience size and income, he has been described as one of the most successful film stars in the world.

As of 2015, Khan is co-chairman of the motion picture production company Red Chillies Entertainment and its subsidiaries, and is the co-owner of the Indian Premier League cricket team Kolkata Knight Riders. He is a frequent television presenter and stage show performer. The media often label him as "Brand SRK" because of his many endorsement and entrepreneurship ventures. Khan's philanthropic endeavours have provided health care and disaster relief, and he was honoured with UNESCO's Pyramide con Marni award in 2011 for his support of children's education. In 2008, Newsweek named him one of their fifty most powerful people in the world.