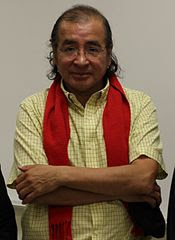 * Tomson Highway is best known for his plays "The Rez Sisters" and "Dry Lips Oughta Move to Kapuskasing," both of which won him the Dora Mavor Moore Award and the Floyd S. Chalmers Award.

Highway has also published a novel, Kiss of the Fur Queen (1998), which is based on the events that led to his brother René Highway’s death of AIDS. He also has the distinction of being the librettist of the first Cree language opera, The Journey or Pimooteewin.

He was artistic director of Native Earth Performing Arts in Toronto from 1986 to 1992, as well as De-ba-jeh-mu-jig theatre group in Wikwemikong.

He currently divides his time between residences in Noelville, Ontario and in France with Raymond Lalonde, his partner of 31 years.