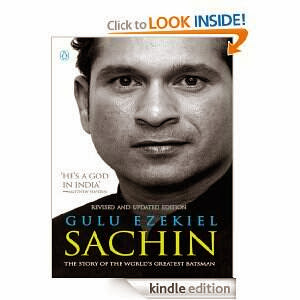 * Sachin Tendulkar is widely acknowledged as the greatest batsman of his generation. The doctor who delivered him on 24 April 1973 reveals in an interview that Tendulkar was born at 1 p.m.
The "god of cricket" has the sporty/religious Sagittarian decan of Leo on his Ascendant ruled by the masterly Sun on the MC.


WIKIPEDIA BLURB Sachin Tendulkar took up cricket at the age of eleven, made his Test debut against Pakistan at the age of sixteen, and went on to represent Mumbai domestically and India internationally for close to twenty-four years. He is the only player to have scored one hundred international centuries, the first batsman to score a double century in a One Day International, and the only player to complete more than 30,000 runs in international cricket. In October 2013, he became the 16th player and first Indian to aggregate 50,000 runs in all recognized cricket (first-class, List A and Twenty20 combined). In 2002, Wisden Cricketers' Almanack ranked him the second greatest Test batsman of all time, behind Don Bradman, and the second greatest ODI batsman of all time, behind Viv Richards.
Read more from his Wikipedia biography.
NATAL DATA and ASTROLOGY CHART BIRTH DATA: Sachin Ramesh Tendulkar, 24 April 1973, 13:00 (1 pm) IST (-5:30), Mumbai, India (18n58, 72e50). ASC: 11 Leo. RR: A (from memory). SOURCE: Sy Scholfield quotes an interview with the doctor who delivered Tendulkar: "Dr Shraddhanand Thakur oversaw the birth of a “healthy baby boy” at 1 pm exactly 40 years ago" ("Sachin Tendulkar: The multi-million dollar baby" by Derek Abraham, DNA (India), 24 April 2013, http://www.dnaindia.com/sport/report-sachin-tendulkar-the-multi-million-dollar-baby-1826338). The online article includes a photo of the doctor holding up the page of the hospital registry showing Tendulkar's details although the time of birth, if on the page, is excluded from view, hence the "A" rather than "AA" rating.
At least two astrology websites state a time of "16.20 pm," no source given.
If you're enjoying these posts, please consider making a donation by Paypal toward the upkeep of this blog and the further acquisition of birth records. Thanks kindly.