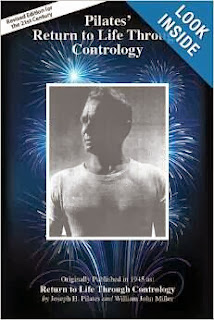 * Joseph Pilates (1883–1967) invented and promoted the Pilates method of physical fitness. His birth certificate has been published online revealing 12:30 a.m. as his time of birth. (The writing says "halb ein uhr" (half to one) rather than "halb vier uhr" (half to four) if we compare with the hand-writing of "neunten" in the same document). Pilates had health-conscious Uranus rising in Virgo and a control-freak triple conjunction of Pluto-Chiron-Saturn, with Pluto in the last degree of Taurus, the sign of the physical body. The Pilates method was first called "Contrology" by Mr. Pilates, based on the idea of muscle control. His Moon is in muscular Aries sextile his Saturn and Part of Fortune.

WIKIPEDIA BLURB
In about 1925, Pilates migrated to the United States. On the ship to America, he met his future wife Clara. The couple founded a studio in New York City and directly taught and supervised their students well into the 1960s. His method, which he and Clara originally called "Contrology," related to encouraging the use of the mind to control muscles. Joseph and Clara Pilates soon established a devout following in the local dance and the performing-arts community of New York. Well-known dancers such as George Balanchine, who arrived in the United States in 1933, and Martha Graham, who had come to New York in 1923, became devotees and regularly sent their students to the Pilates for training and rehabilitation. His exercise regimen built flexibility, strength and stamina. Soon after it became known that ballerinas were attending the Pilates gym on 8th Avenue, society women followed.
Joseph Pilates wrote several books, including Return to Life through Contrology and Your Health, and he was also a prolific inventor, with over 26 patents cited. Joe and Clara had a number of disciples who continued to teach variations of his method or, in some cases, focused exclusively on preserving the method, and the instructor-training techniques, they had learned during their studies with Joe and Clara.
Joseph Pilates died in 1967 at the age of 83 in New York.
Read more from his Wikipedia biography.

Copyright Sy Scholfield. All rights reserved in all media. Conditions of use: My data collection is the result of thousands of hours of volunteer research work. Links via social media are welcome but my research data must not be distributed commercially and must never be sold by other parties. Attribution to "Sy Scholfield" as the collector should be given and a hyperlink or URL for this blog should be included in source notes.