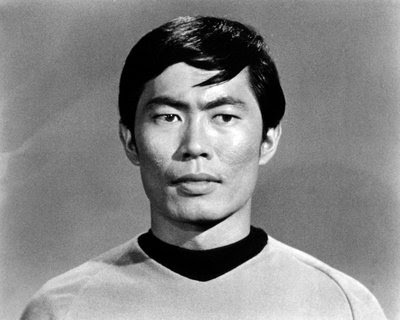 * With his Aquarian Ascendant ruled by a virtually unaspected Uranus, George Takei embodies the Uranian spirit of science fiction culture, internet media, humanitarian politics and a unique sense of humour. Moreover, Mars in Sagittarius on his MC rules his Sun in the last degree of Aries, making him an outspoken pioneer and successful leader in these fields.

Takei is most widely known for his role as Lieutenant Sulu, helmsman of the spaceship Enterprise in the sci-fi TV series Star Trek (1966-1969) and six Star Trek feature films (1979-1991). Today he is a regular on the science fiction convention circuit throughout the world.

Takei came out publicly as gay in October 2005. In 2006, he embarked on a nationwide "Equality Trek" speaking tour sharing his life as a gay Japanese American, his 18-year relationship with (his now-husband) Brad Altman, and experiences on Star Trek, encouraging others to share their own personal stories. In 2008, Takei and Altman became the first same-sex couple to apply for a marriage licence in West Hollywood, and they were married on 14 September 2008.

Takei joined Facebook in 2011 and today his daily posts of humorous pictures (many of which are related to sci-fi, gay culture and political satire) have attracted over 8 million followers, such that he has been lauded as "the funniest guy on Facebook."

On his website, Takei declares: "My name is George Takei. Some know me as Mr. Sulu but I hope all know me as a believer in, and a fighter for, the equality and dignity of all human beings." Astrologically, his words and actions reveal him as a herald of the Age of Aquarius.

Copyright Sy Scholfield 2015. All rights reserved in all media.