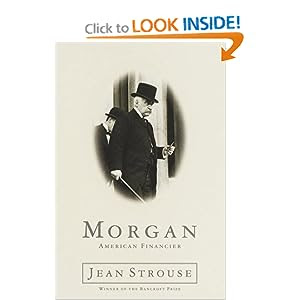 * Jean Strouse's biography of J. P. Morgan includes the American financier's time of birth quoted from his grandfather's diary. John Pierpont "J. P." Morgan (April 17, 1837 – March 31, 1913) was an American financier, banker, philanthropist and art collector who dominated corporate finance and industrial consolidation during his time. In 1892 Morgan arranged the merger of Edison General Electric and Thomson-Houston Electric Company to form General Electric. After financing the creation of the Federal Steel Company, he merged in 1901 with the Carnegie Steel Company and several other steel and iron businesses, including Consolidated Steel and Wire Company owned by William Edenborn, to form the United States Steel Corporation.

Morgan died in Rome, Italy, in his sleep in 1913 at the age of 75, leaving his fortune and business to his son, John Pierpont "Jack" Morgan, Jr., and bequeathing his mansion and large book collections to The Morgan Library & Museum in New York.

At the height of Morgan's career during the early 1900s, he and his partners had financial investments in many large corporations and were accused by critics of controlling the nation's high finance. He directed the banking coalition that stopped the Panic of 1907. He was the leading financier of the Progressive Era, and his dedication to efficiency and modernization helped transform American business.

HOROSCOPE NOTES Eris seems to be associated with Libra, the sign of relationships and partnerships. J.P. Morgan had Eris very close to his Ascendant and throughout his career he capitalised on business mergers, "dominat[ing] corporate finance and industrial consolidation during his time." NATAL DATA and ASTROLOGY CHART