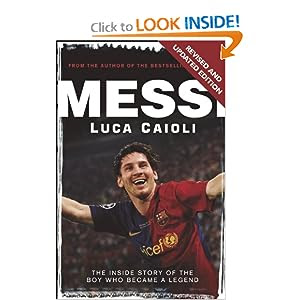 * A recent biography of Lionel "Leo" Messi includes a time of birth for the champion soccer player which is several minutes earlier than that stated in a previous biography by the same author.

Lionel Andrés "Leo" Messi (born 24 June 1987) is an Argentine footballer who plays as a forward for La Liga club FC Barcelona and the Argentina national team. He serves as the captain of his country's national football team. By the age of 21, Messi had received Ballon d'Or and FIFA World Player of the Year nominations. The following year, in 2009, he won his first Ballon d'Or and FIFA World Player of the Year awards. He followed this up by winning the inaugural FIFA Ballon d'Or in 2010, and again in 2011 and 2012. He also won the 2010–11 UEFA Best Player in Europe Award. At the age of 24, Messi became Barcelona's all-time top scorer in all official club competitions. At age 25, Messi became the youngest player to score 200 La Liga goals.

Consistently rated by commentators, coaches and colleagues as the best footballer in the world and as one of the greatest players in the history of the game, Messi is the first football player in history to win four FIFA/Ballons d'Or, all of which he won consecutively. Messi has won five La Ligas, two Copas del Rey, five Supercopas de España, three Champions Leagues, two Super Cups and two Club World Cups. In March 2012, Messi made UEFA Champions League history by becoming the first player to score five goals in one match, achieving the feat in a 7–1 win over Bayer Leverkusen. He also matched José Altafini's record of 14 goals in a single Champions League season. Messi became the first player to top-score in four successive Champions League campaigns. He set the European record for most goals scored in a season during the 2011–12 season, with 73 goals. In the same season, he set the current goalscoring record in a single La Liga season, scoring 50 goals. On 16 February 2013, Lionel Messi scored his 300th Barcelona goal against Granada.

Messi was the top scorer of the 2005 FIFA World Youth Championship with six goals. In 2006, he became the youngest Argentine to play in the FIFA World Cup and he won a runners-up medal at the Copa América tournament the following year, in which he was elected young player of the tournament. In 2008, he won his first international honour, an Olympic gold medal, with the Argentina Olympic football team. Sportspro has rated Lionel Messi as the third most marketable athlete in the world. His playing style and stature have drawn comparisons to compatriot Diego Maradona, who himself declared Messi his "successor".

What has Messi harnessed from his chart to become one of the best footballers in the world and one of the greatest players in the history of the game? Mars squares and rules Jupiter in the sporty Sagittarian decan of Aries. Jupiter, in turn, rules and trines Uranus in Sagittarius, which is quincunx to Mars, and so we go around the chart again.

BIRTH DATA: 24 June 1987, about 05:55 (5:55 a.m.) BZT2 (+3), Rosario, Argentina (32s57, 60w40). ASC: about 2 Gemini. RR=B (from biography). SOURCE: Sy Scholfield (c) quotes Luca Caioli's book, Messi: The Inside story of the Boy Who Became a Legend (London: Corinthian, 2012): "A few minutes before six in the morning, Lionel Andrés Messi is born, weighing three kilos and measuring 47 centimetres in length, as red as a tomato and with one ear completely folded over due to the force of the labour - anomalies which, as with many other newborns, disappear within the first few hours." NB: Previously Patrick de Jabrun quoted the biography Magic Messi for a birth time of 6 a.m.