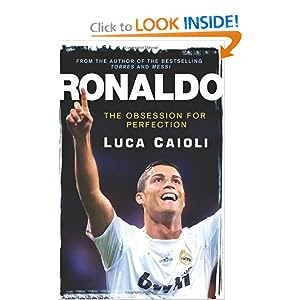 * The birth time of Portuguese soccer/football player, Cristiano Ronaldo, is revealed in a recent biography.

Cristiano Ronaldo dos Santos Aveiro, OIH, (born 5 February 1985), commonly known as Cristiano Ronaldo, is a Portuguese footballer who plays as a forward for Spanish La Liga club Real Madrid and who serves as captain of the Portuguese national team. Ronaldo became the most expensive footballer in history after moving from Manchester United to Real Madrid in a transfer worth £80 million (€93.9 million/$131.6 million). In addition, his contract with Real Madrid, in which he is paid €12 million per year, makes him one of the highest-paid footballers in the world, and his buyout clause is valued at €1 billion as per his contract.

Ronaldo is considered one of the best footballers in the world. He holds numerous former and current scoring records, including records for most goals scored in a season for Real Madrid, most goals scored per minute in La Liga, first top European league player to reach 40 goals in a single season in two consecutive years, fastest Real Madrid player to reach one hundred league goals, and the first player ever to score against every team in a single season in La Liga. In January 2013, Cristiano Ronaldo scored his 300th club goal.

Folks with a Venus-Mars conjunction on the Ascendant tend to be popular and highly attractive in one way or another. Ronaldo has this feature in his chart in sporty Aries: In October 2012, he became the first sportsperson to reach 50 million 'likes' on Facebook.