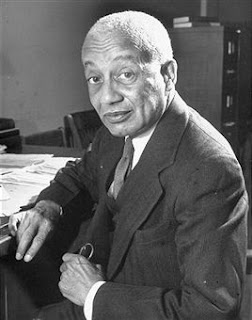 * Distinguished as the first African American Rhodes Scholar in 1907, Alain Leroy Locke was the philosophical architect —the acknowledged "Dean"— of the Harlem Renaissance. As a result, popular listings of influential African-Americans have repeatedly included him. On 19 March 1968, the Rev. Dr. Martin Luther King, Jr. proclaimed: "We're going to let our children know that the only philosophers that lived were not Plato and Aristotle, but W. E. B. Du Bois and Alain Locke came through the universe."

Locke was gay, and may have encouraged and supported other gay African-Americans who were part of the Harlem Renaissance. However, he was not fully public in his orientation and referred to it as his point of "vulnerable/invulnerability", taken to mean an area of risk and strength in his view.

After his retirement from Howard University in 1953, Locke moved to New York City. He suffered from heart disease, and after a six-week illness died at Mount Sinai Hospital on 9 June 1954.