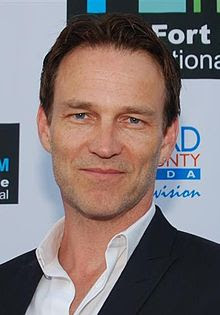 * Stephen Moyer is best known as vampire Bill Compton in the HBO series True Blood. Moyer's first television role was in 1993 as Philip Masefield in the TV adaptation of the play Conjugal Rites, written by actor/playwright Roger Hall. This was followed by the television film Lord of Misrule, filmed in Fowey, Cornwall, which also featured Richard Wilson, Emily Mortimer and Prunella Scales. In 1997, Moyer made his big-screen debut landing the lead role in the film adaptation of the long-running comic strip Prince Valiant by Hal Foster, working alongside Ron Perlman and Katherine Heigl.

In August 2009, Moyer became engaged to actress Anna Paquin, who played his character's love interest in True Blood. The couple married on 21 August 2010. Moyer and Paquin have a son, Charlie, and a daughter, Poppy, who are fraternal twins born in September 2012. Moyer also has a son, Billy, born in 2000 and a daughter, Lilac, born in 2002.