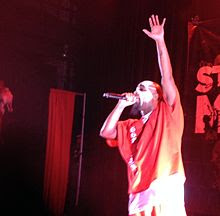 * Tech N9ne has sold over two million albums and has had his music featured in film, television, and video games. In 2009, he won the Left Field Woodie award at the mtvU Woodie Awards.

His stage name originated from the TEC-9 semi-automatic handgun, a name given to him by rapper Black Walt due to his fast-rhyming Chopper style. Yates later applied a deeper meaning to the name, claiming that it stands for the complete technique of rhyme, with "tech" meaning technique and "nine" representing the number of completion.

Yates is known for his dynamic rhyme schemes and speed rap abilities known as the Chopper style. He stated that he purposely creates flow patterns in order to sound like a percussion while he raps. After hearing an instrumental he would come up with different kinds of patterns and then "fill in" the actual lyrics.