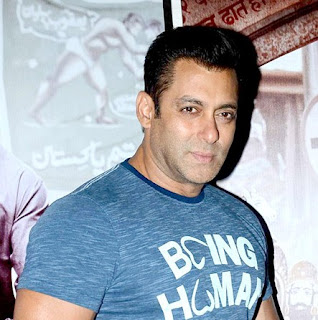 * Salman Khan has a significant following in Asia and the Indian diaspora worldwide, and is cited in the media as one of the most popular and commercially successful actors of Hindi cinema. He was ranked 7th in Forbes's first global list of highest-paid actors in the world with USD 33.5 million, earning more than Hollywood actors like Dwayne 'The Rock' Johnson, Johnny Depp, Brad Pitt and Leonardo DiCaprio.

Khan established himself in Bollywood in the 1990s with roles in several top-grossing productions. After a brief period of decline in the 2000s, he achieved greater stardom in the 2010s by playing the lead role in several successful action films, including Dabangg (2010), Bodyguard (2011), Ek Tha Tiger (2012), Kick (2014) and Bajrangi Bhaijaan (2015), Prem Ratan Dhan Payo (2015). He has starred in the highest-grossing Bollywood films of nine separate years which is a Bollywood record. For his contributions to film, the Government of India honoured him with the 2008 – Rajiv Gandhi Award for Outstanding Achievement in Entertainment.

In addition to his acting career, Khan is a stage performer and an active humanitarian through his charity organisation Being Human with his Brother Sooban Ahmad Khan. Khan's off-screen life is marred by controversy and legal troubles. His tumultuous relationship with Aishwarya Rai, hunting of endangered species, and a negligent driving case in which he ran over five people with his car, killing one, have been extensively covered by the Indian media. For the last of these, Khan was sentenced to a five-year imprisonment in 2015. Later on Salman was acquitted of all charges in the hit-and-run case by the Bombay High Court.