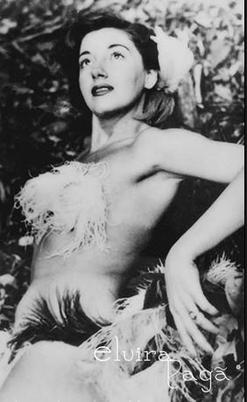 * Elvira Pagã was the first Rio Carnival Queen, the first woman to wear a bikini in public, and one of the first women to have cosmetic surgery in Brazil. Talented and controversial, she broke the status-quo and faced the reigning "machismo" with fearless audacity during the Brazilian military dictatorship and the revolutionary 1960s, where she lived with determination and courage. Pagã retired from public life, wrote and painted in her later years, dying a recluse on 8 May 2003, aged 82, in Rio de Janeiro. NATAL DATA and ASTROLOGY CHART

Translation: Elvira was born on 6 September 1920 at 6:00 am. She was the third daughter of the couple José Cozzolino, a descendant of Italians born in the United States, more precisely in Brooklyn, and Regina Maria Olivieri, born in Castro, Paraná ... born in Itararé.