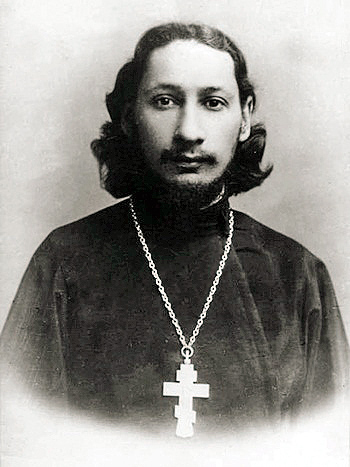 In Moscow, on 26 February 1933, he was arrested on suspicion of engaging in a conspiracy to overthrow the state and restore with Nazi assistance a fascist monarchy. He defended himself vigorously against the imputations but was sentenced to ten years in the Labor Camps by the infamous Article 58 of Joseph Stalin's criminal code (clauses ten and eleven: "agitation against the Soviet system" and "publishing agitation materials against the Soviet system"). The published agitation materials were his monograph about the theory of relativity. His manner of continuing to wear priestly garb annoyed his employers. The state offered him numerous opportunities to go into exile in Paris, but he declined them.

He was imprisoned and eventually shot dead in St. Petersburg on the night of 8 December 1937 in a wood not far from the city.

Translation: Evlakh ... It was here, on the wild steppe, that I was born on 9 January 1882 in the evening about seven o'clock, the hour of the day that I love most of all.