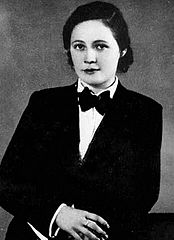 * Vítězslava Kaprálová conducted the Czech Philharmonic in 1937 and a year later the BBC Symphony Orchestra in her composition "Military Sinfonietta," to much critical acclaim. Her husband was the Czech writer Jiří Mucha, whom she married two months before she died. Despite her untimely death, allegedly from miliary tuberculosis, in Montpellier, France at the age of 25, Kaprálová created an impressive body of work. There is no doubt that, had she lived, she would have become one of the most important women composers in Europe. NATAL DATA and ASTROLOGY CHART