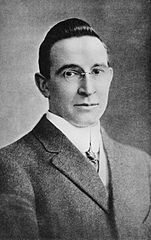 * B. C. Forbes emigrated to New York City in 1904 where he worked as a writer, financial editor, and syndicated columnist, eventually founding Forbes magazine in 1917.

Forbes is a business magazine which features original articles on finance, industry, investing, and marketing topics. It also reports on related subjects such as technology, communications, science, and law. The magazine is well known for its lists and rankings, including its lists of the richest Americans (the Forbes 400) and rankings of world's top companies (the Forbes Global 2000). The motto of Forbes magazine is "The Capitalist Tool."

B. C. Forbes had powerful planetary combinations in his chart: Pluto conjunct Sun (ruler of the Leo Ascendant) and Mars conjunct Moon (with Mars ruling Saturn on a 29° Aries MC). Not to mention a stellium of six planets in business-oriented Taurus high in the sky. Oh, and unaspected Jupiter in Aries.