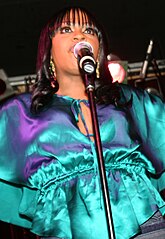 * Lil' Mo debuted on the music scene as Missy Elliott's protégée and contributed guest vocals to some of Elliott's work, most notably the record-breaking "Hot Boyz". Under the wing of Elliott, Lil' Mo would land a contract deal with Elektra Records and release charting singles of her own, including "Ta Da", "Superwoman Pt. II", "4Ever", "Hot Girls", and her debut single "5 Minutes".

In addition to her solo work and collaborative efforts with Missy Elliott, Lil' Mo worked with former associate Ja Rule, with whom she penned chart-topping hits like "Put It on Me" and "I Cry". Thereafter, Lil' Mo would go on to release four studio albums, eleven music videos and over fourteen hit singles. Mo would also be largely responsible for bringing then-unknown rapper Fabolous to mainstream media attention. Aside from her work as a solo vocalist, Mo has contributed production and backing vocals to numerous artists' records throughout the years including: Nicole Wray, Jay-Z, Tamar Braxton, Gerald LeVert, Faith Evans, among many others.