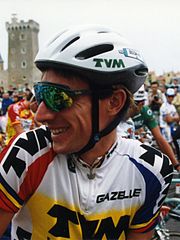 His biography states he was born at 6:15 AM (no source given) but Caroline Gerard kindly looked up his birth entry in the registry which states 6:15 PM. Both sets of data and charts are displayed below. Either way, Millar is at least a quintuple Virgo - with both luminaries plus three planets in this sign. (Ironically, his biography is subtitled "Unravelling the Mystery Surrounding Britain's Most Successful Tour de France Cyclist" yet this book leaves the reader wondering if "AM" is a typo or not, and if not, the exact nature of the source of this info).