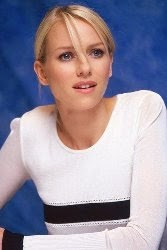 * Naomi Watts was raised in England and Wales before moving to Sydney, Australia in 1982, aged 14. Whle enrolled in acting lessons in Sydney she befriended actress Nicole Kidman. (Watts and Kidman both have Scorpio rising; Watts' Venus -- ruler of her 7th House of influential relationships -- is conjunct Kidman's Ascendant). Around 1992, Watts spent a year travelling, visiting Los Angeles and being introduced to agents through Kidman.

After years as a struggling actress, Watts came to international attention in David Lynch's psychological thriller Mulholland Drive (2001). (Her success through persistence and hard work is indicated by her chart's Saturn-handled Slingshot, Bucket Shape and Yod in the 6th House of work).

Watts received nominations at the Academy Awards and the Screen Actors Guild Awards in the Best Actress categories for her portrayal of Cristina Peck in Alejandro González Iñárritu's neo-noir 21 Grams (2003) and for her leading role as Maria Bennett in the disaster film The Impossible (2012).