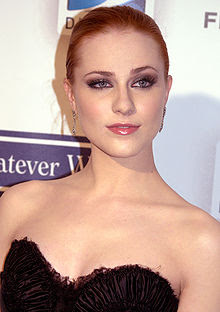 * Evan Rachel Wood reportedly tweeted that she was born at 1:12 p.m., but I have her birth certificate on file clearly stating 1:24 p.m. as her time of birth.

Wood has been described by The Guardian as "one of the best actresses of her generation."

She has the dramatic Sun conjunct her MC and Jupiter in the last degree of Aries in the 5th, the house of acting. The Sun and Jupiter co-rule Uranus in the Leo decan of Sagittarius in the 1st house.

Evan Rachel Wood began her acting career in the late 1990s, appearing in several television series, including American Gothic (1995–1996) and Once and Again (1999–2002). She made her début as a leading film actress at the age of nine in Digging to China (1998) and became well known after her transition to a more adult-oriented Golden Globe-nominated role in the teen drama film Thirteen (2003).[2] Wood continued acting mostly in independent films, including Pretty Persuasion (2005), Down in the Valley (2006), Running with Scissors (2006), and in the big studio production Across the Universe (2007). Since 2008, Wood has appeared in more mainstream films, including The Wrestler (2008), Whatever Works (2009) and The Ides of March (2011). She has also returned to television, playing the supporting role of Queen Sophie-Anne on True Blood from 2009 to 2011 and playing Kate Winslet's daughter in the HBO miniseries Mildred Pierce (2011), a role for which she was nominated for the Golden Globe and Emmy Award for Best Supporting Actress.