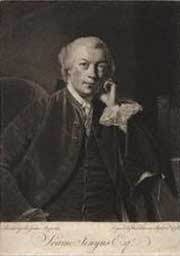 * Soame Jenyns ― who wrote against cruelty to animals like the "majestic bull" ― had angular Neptune ruling the Moon in sensitive Pisces, both in the 6th house of animals. And almighty Jupiter virtually unaspected in the sign of the bull.

For the measure of literary repute which he enjoyed during his life Soame Jenyns (1 January 1704 – 18 December 1787) was indebted as much to his wealth and social standing as to his accomplishments and talents, though both were considerable. His poetical works, the Art of Dancing (1727) and Miscellanies (1770), contain many passages graceful and lively though occasionally verging on licence.

The first of his prose works was his Free Inquiry into the Nature and Origin of Evil (1756). This essay was severely criticized on its appearance, especially by Samuel Johnson in the Literary Magazine. Johnson condemned the book as a slight and shallow attempt to solve one of the most difficult of moral problems. Jenyns, a gentle and amiable man in the main, was extremely irritated by his review. He put forth a second edition of his work, prefaced by a vindication, and tried to take vengeance on Johnson after his death by a sarcastic epitaph.

BIRTH DATA: 1 January 1704 OS, 00:01 (12:01 a.m.) LMT (+0:00:40), London, England (51n30, 00w10). ASC: 14 Libra. RR: B (from biography). SOURCE: Sy Scholfield (c) quotes Charles Nalson Cole, ed., The Works of Soame Jenyns (London: T. Cadell, 1793), p. xv: "SOAME JENYNS, Esq. the author of these volumes, was born at twelve o'clock at night, in Great Ormond-street, in London, in the year 1703/4. . . . The hour of his birth he often mentioned; sometimes adding . . . it was still more difficult to ascertain the day of his birth, and he added farther, in his pleasant manner, that as that question had not been determined, he considered himself at liberty to choose his birth-day, and preferring the birth of the year to the day of its death, he had chosen New Year's Day, which in all civilized countries was celebrated as a day of great festivity."