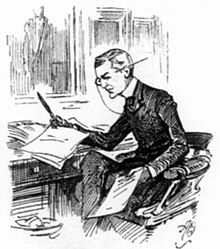 * Brandon Thomas's father recorded his time of birth in the family Pedigree Book.

Walter Brandon Thomas (24 December 1848 – 19 June 1914) was an English actor, playwright and song writer, best known as the author of the farce Charley's Aunt.

Born in Liverpool to a family with no theatrical connections, Thomas worked in commerce, and as an occasional journalist, before achieving his ambition of becoming an actor. After a succession of minor roles, he became increasingly sought after as a character actor. He also wrote more than a dozen plays, the most celebrated of which, Charley's Aunt (1892), broke all historic records for plays of any kind, with an original London run of 1,466 performances and numerous subsequent productions all around the world, film and musical theatre adaptations.

Although Thomas never repeated the prodigious success of Charley's Aunt, he maintained a career as an actor and dramatist until his death, acting mostly in comedy, but with occasional serious roles in the plays of Shakespeare and others.

Brandon's signature play, Charley's Aunt, broke all historic records for plays of any kind. He had record-breaking Jupiter in dramatic Leo at the tail of a Kite pattern and as a Bucket handle or lead planet in a Locomotive shape.