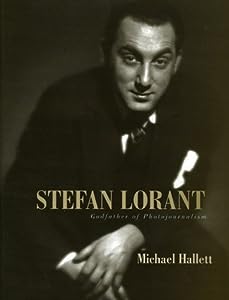 After completing high school in his native Hungary in 1919, Lorant moved to Germany, where he made his mark in films and photojournalism. His first film, The Life of Mozart, established him as a filmmaker, and he went on to make 14 films in Vienna and Berlin, some of which he wrote, directed, and photographed. He claimed to have given Marlene Dietrich her first film test, and though he rejected her for the part, they remained lifelong friends. Lorant's abilities in writing and still photography led to the editorship of the Münchner Illustrierte Presse, one of Germany's finest picture magazines.

Opposed to Adolf Hitler, Lorant was imprisoned right after Hitler came to power. Released after six months, he made his way to England, where he wrote I Was Hitler's Prisoner, a memoir that sold out many printings. He edited the Weekly Illustrated, a popular British picture magazine, then founded Lilliput, made famous by his clever picture juxtapositions, as in Neville Chamberlain versus the llama. On October 1, 1938, Lorant co-founded with publisher Sir Edward G. Hulton the first great British picture magazine, Picture Post. During this time, Lorant published a Picture Post Special about the United States.

Failing to obtain British citizenship, Lorant moved to Lenox, Massachusetts in July 1940, where he lived the remainder of his life. Tom Hopkinson succeeded Lorant as editor of Picture Post.

A mutual reception between Mercury in Pisces and Neptune in Gemini could not be more apt for the "godfather of photojournalism."