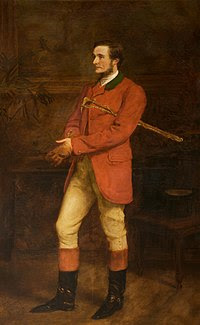 * Hugh Grosvenor, considered to be the richest man in Britain at his death, "was born at four in the morning" according to a biography.

He inherited the estate of Eaton Hall in Cheshire and land in Mayfair and Belgravia, London, and spent much of his fortune in developing these properties. Although he was a Member of Parliament from the age of 22, and then a member of the House of Lords, his main interests were not in politics, but rather in his estates, in horse racing, and in country pursuits. He developed the stud at Eaton Hall and achieved success in racing his horses, winning the Derby on four occasions. Grosvenor also took an interest in a range of charities. At his death he was considered to be the richest man in Britain.

The 'master of the horse' had an exact conjunction of Mars, Jupiter and Part of Fortune.