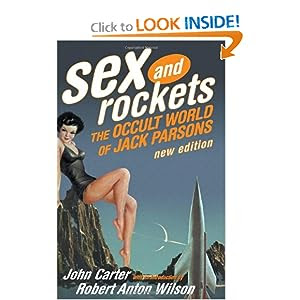 * The biography of Jack Parsons (scientist, poet, and self-proclaimed Antichrist) provides such a detailed account of his birth that the information probably comes from his birth certificate.

John Whiteside Parsons (born Marvel Whiteside Parsons) (October 2, 1914 in Los Angeles, California – June 17, 1952 in Pasadena, California), better known as Jack Parsons, was an American rocket propulsion researcher at the California Institute of Technology and a pioneer in solid rocket fuel research and development. He was one of the principal founders of the Jet Propulsion Laboratory and the Aerojet Corp.

Parsons was also an occultist and one of the first Americans to take a keen interest in the writings of English author and Thelema's founder Aleister Crowley. In this capacity, he joined and eventually led an American lodge of Crowley's magical order, Ordo Templi Orientis (O.T.O.).

Copyright Sy Scholfield. All rights reserved in all media.
Posted by astrodatablog at 1:40:00 pm