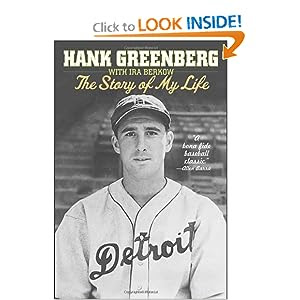 * In his autobiography, legendary baseball player, Hank Greenberg, writes that he was born "exactly forty-five minutes after the new year, at 12:45 A.M. on January 1, 1911."

Henry Benjamin "Hank" Greenberg (January 1, 1911 – September 4, 1986), nicknamed "Hammerin' Hank" or "The Hebrew Hammer," was an American professional baseball player in the 1930s and 1940s. A first baseman primarily for the Detroit Tigers, Greenberg was one of the premier power hitters of his generation. He hit 58 home runs in 1938, equaling Jimmie Foxx's 1932 mark for the most home runs in one season by any player between 1927 (when Babe Ruth set a record of 60) and 1961 (when Roger Maris surpassed it).

Greenberg was a five-time All-Star, was twice named the American League's Most Valuable Player, and was elected to the Hall of Fame in 1956. Greenberg became the first major league player to hit 25 or more home runs in a season in each league. Greenberg is the American League record holder for most RBIs in a single season by a right-handed batter—183 RBI in 1937 (a 154-game schedule.) Only left-handed batter Lou Gehrig's 184 RBI in 1931 surpasses Greenberg in the American League record books. Greenberg was sold to the Pittsburgh Pirates in 1947, became the very first baseball player to earn over $80,000/year in salary (he was paid $100,000, ($1,041,000 today)[when?] plus $25,000 that his contract with Detroit called for in the event they sold or traded him). He was one of the few opposing players publicly to welcome Jackie Robinson to the majors.

Greenberg was the first Jewish superstar in American professional sports. He attracted national attention in 1934 when he refused to play baseball on Yom Kippur, the Jewish day of atonement, even though the Tigers were in the middle of a pennant race and he was not in practice a religious Jew.

Greenberg is widely considered as one of the greatest sluggers in baseball history.

"One of the greatest sluggers in baseball history"? Pluto is unaspected except for a sextile to Saturn in Aries. Ouch.

Copyright Sy Scholfield. All rights reserved in all media.
Posted by astrodatablog at 2:54:00 pm