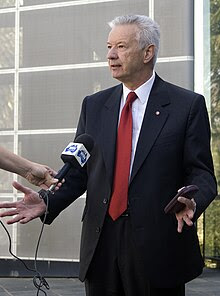 * Doug Cameron, the Scottish-born Australian politician and trade unionist, recently chaired the Labor-led committee that has criticised newspapers standing against Labor's media reforms. Many thanks to Caroline Gerard for his data.

Douglas Niven Cameron (born 27 January 1951) is an Australian politician and trade unionist. He has been a Labor member of the Australian Senate since July 2008, representing the state of New South Wales.

Cameron was born in Bellshill, Scotland. He was first elected to the Senate at the 2007 federal election. He won Labor preselection by mounting a successful challenge to then incumbent Senator George Campbell. Cameron previously served as the national secretary of the Australian Manufacturing Workers Union.

Read more from his Wikipedia biography and parliamentary biography.

Mercury in Capricorn ruling and quincunx the Gemini Ascendant from the 8th House has manifested in an outspoken and forthright speaker.