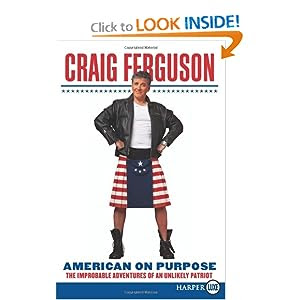 * I had an inkling about this guy's data. In his autobiography, late-night TV-host Craig Ferguson states he was born at 6:10 a.m. (RR=B). However, Scottish data collector Caroline Gerard has checked the birth certificate to find 6.10 p.m. (RR=AA), adding that it "[w]asn’t a very clear letter, if he [Ferguson] was looking at his birth entry, but I had the advantage of being able to see other entries by the same Registrar." We can therefore upgrade the Rodden Rating from "B" (6:10 a.m.) to "AA" (6:10 p.m.). Where possible, we should always check the original source (and follow our intuition)!

Craig Ferguson (born 17 May 1962) is a Scottish-born American television host, stand-up comedian, writer, actor, director, author, producer and voice artist. He is the host of The Late Late Show with Craig Ferguson, an Emmy Award-nominated, Peabody Award-winning late-night talk show that airs on CBS. In addition to hosting that program and performing stand-up comedy, Ferguson has written two books: Between the Bridge and the River, a novel, and American on Purpose, a memoir. He became a citizen of the United States in 2008.

Before his career as a late-night television host, Ferguson was best known in the United States for his role as the office boss on The Drew Carey Show, Nigel Wick (1996–2003). He also wrote and starred in three films, directing one of them.

If we were to take Ferguson by his word (6:10 a.m.), we would see that the ever loquacious TV host has Mercury in Gemini exactly conjunct his Ascendant, but using the birth certificate data (6:10 p.m.), we find that the ex-punk comedian with the stage name 'Bing Hitler' has mercury in the 8th House at the apex of the T-square. With Neptune conjunct Moon on his Ascendant it seems he is mistaken about his birth time. Neptune-Moon also bespeaks the 'Unlikely Patriot' subtitle of his autobiography. Both charts are below.