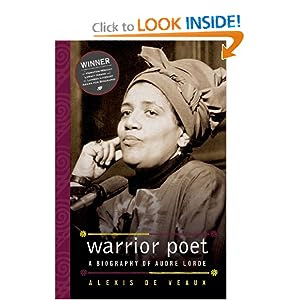 Lorde's poetry was published very regularly during the 1960s — in Langston Hughes' 1962 New Negro Poets, USA; in several foreign anthologies; and in black literary magazines. During this time, she was politically active in civil rights, anti-war, and feminist movements. Her first volume of poetry, The First Cities (1968), was published by the Poet's Press and edited by Diane di Prima, a former classmate and friend from Hunter College High School. Dudley Randall, a poet and critic, asserted in his review of the book that Lorde "does not wave a black flag, but her blackness is there, implicit, in the bone."

Her second volume, Cables to Rage (1970), which was mainly written during her tenure at Tougaloo College in Mississippi, addressed themes of love, betrayal, childbirth and the complexities of raising children. It is particularly noteworthy for the poem "Martha", in which Lorde poetically confirms her homosexuality: "[W]e shall love each other here if ever at all." Later books continued her political aims in lesbian and gay rights, and feminism. In 1980, together with Barbara Smith and Cherríe Moraga, she co-founded Kitchen Table: Women of Color Press, the first U.S. publisher for women of colour. Lorde was State Poet of New York from 1991 to 1992.

"[W]e shall love each other here if ever at all." Sounds very Venus-trine-Libra rising!

Copyright Sy Scholfield. All rights reserved in all media.
Posted by astrodatablog at 2:55:00 pm