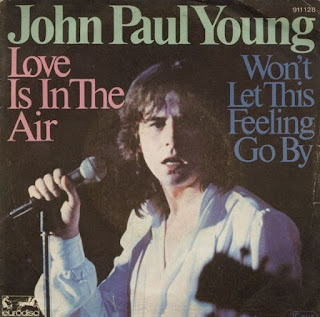 * John Paul Young had a 1978 worldwide hit with the single, "Love Is in the Air", which peaked at No. 3 on the Australian charts, No. 7 in the US Billboard Hot 100, and No. 5 in the UK singles chart. The associated album, Love Is in the Air reached the top 40 on the Australian albums chart. European chart success for "Love Is in the Air" included No. 2 in Norway and Sweden, No. 3 in Austria and Germany, No. 5 in Switzerland and No. 9 in the Netherlands. The song peaked at No. 2 in South Africa. As a result of his popularity in Australia he was crowned 'King of Pop' in October 1978.

Baz Luhrmann's internationally successful film Strictly Ballroom (released in 1992) featured a new version of "Love Is in the Air" and Young's single once again peaked at No. 3 on the Australian Singles Charts and became a top 50 hit in the UK. In 2000, he played to his largest audience as a featured performer at the closing ceremony of the 2000 Summer Olympics in Sydney.