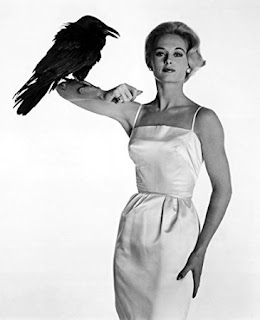 * Tippi Hedren was one of Alfred Hitchcock's ice-cool blondes, making her film debut in his suspense thriller The Birds followed by the title role in his psychological thriller Marnie. Hedren claims that Hitchcock was a sexual predator and control freak, who subjected her (and the birds?) to cruelty on the set. He also tried to destroy her career. Hitchcock's Mars is conjunct Hedren's Moon and his Scorpio Jupiter is conjunct her MC.

Hedren rejected Hitchcock's advances and went on to enjoy a successful career, appearing in over eighty films and TV shows. She has the feisty comination of Mars and Saturn straddling her Ascendant; with her Saturn square Hitchcock's Mars and her Mars quincunx his Pluto. This synastry made for quite a standoff.

Hedren also founded the non-profit Roar Foundation and Shambala Preserve, a sanctuary that houses some 70 animals. She is the mother of actress Melanie Griffith and grandmother of actress and model Dakota Johnson.