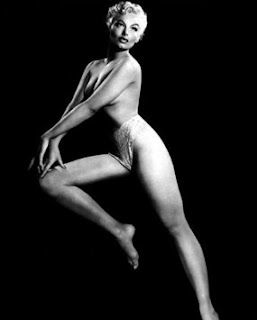 * Lili St. Cyr was one of the most recognized acts in striptease in the 1940s and 1950s (along with Gypsy Rose Lee and Ann Corio). St. Cyr's name popped-up regularly in 1950s tabloids in stories about her many husbands (she married six times), brawls over her, and her attempted suicides.

Her acts had names like "The Wolf Woman", "Afternoon of a Faun", "The Ballet Dancer", "In a Persian Harem", "The Chinese Virgin", as well as "Suicide" (where she tried to woo a straying lover by revealing her body), and "Jungle Goddess" (in which she appeared to make love to a parrot). Lili was known not only for props like her bathtub, but elaborate sets of vanities, mirrors, and hat racks. She variously performed as Cinderella, a matador, a Salome, a bride, a suicide, Cleopatra and Dorina Grey.

St. Cyr retired from the stage in the 1970s, whereupon she began a lingerie business in which she would retain an interest until her death in Los Angeles, California on 29 January 1999, aged 81.

Born "Marie Frances Van Schaack," she had glamorous Neptune rising in Leo, high-class Saturn (also on the Ascendant) in Cancer ruled by a scandalous Scorpio Moon, sexy Pluto unaspected, dramatic Sun also unaspected, and "exotic dancer" Uranus in Aquarius at the apex of a fixed T-square.