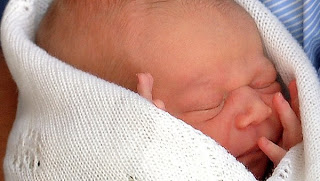 * The anonymous British royal baby, now named Prince George, has a stellium of planets in Cancer including the Sun in the final degree. His Capricorn Moon is conjunct the natal Saturn of his late grandmother, Diana, Princess of Wales. He was born while transiting Pluto was posthumously making its exact opposition to her natal Sun. WIKIPEDIA BLURB

Prince George of Cambridge (George Alexander Louis; born 22 July 2013) is the first, and so far only, child of Prince William, Duke of Cambridge, and his wife Catherine, Duchess of Cambridge, as well as the only grandchild of Charles, Prince of Wales, and his first wife Diana, Princess of Wales. He is third in line to succeed his great-grandmother, Queen Elizabeth II, after his grandfather and father.

BIRTH DATA: George Alexander Louis, 22 July 2013, 16:24 (4:24 p.m.) BST (-1), London, England (51n30, 0w10). ASC: 27 Scorpio. RR: A (from birth announcement). SOURCE: Birth announcement quoted and photographed in "Royal baby: Kate gives birth to boy," BBC News, 22 July 2013: "The news has been displayed on an easel in the forecourt of Buckingham Palace in line with tradition. A bulletin - signed by the Queen's gynaecologist Marcus Setchell, who led the medical team that delivered the baby - was taken by a royal aide from St Mary's to the palace under police escort. The document said: 'Her Royal Highness, the Duchess of Cambridge was safely delivered of a son at 4.24pm today.'" 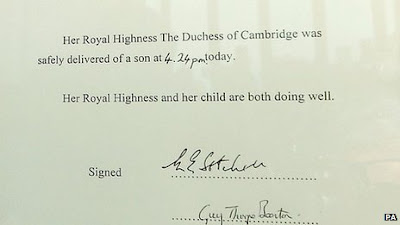