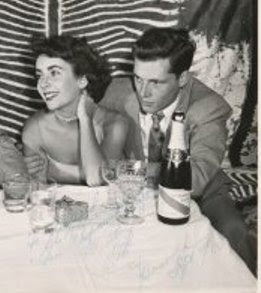 * Handsome hotel heir, Conrad Hilton Jr., had maidenly Venus in Gemini smack-bang on his Ascendant and with no close aspects except for a sextile to its ruler, Mercury in glamour-puss Leo. He liked the ladies and he is remembered for his short marriage to one beautiful future star in particular. Not the beauty queen Zsa Zsa Gabor, with whom he had an affair in his teens while she was his step-mother. And not the second of his two 18-year-old brides, oil heiress Patricia McClintock, but the other young lady: the budding screen legend Elizabeth Taylor. When he died young, at the age of 42, Hilton was fated to be identified in headlines as "ONCE WED TO LIZ TAYLOR." A renowned playboy and gambler, Hilton had philandering punter Jupiter on his MC opposite majorly boozy Neptune in Leo on his IC (and its ruler the Sun conjunct do-or-die Pluto). His death from a heart attack was brought about by many years of hitting the bottle. WIKIPEDIA BLURB

Conrad Nicholson "Nicky" Hilton, Jr. (July 6, 1926 – March 31, 1969) was an American socialite, hotel heir, businessman, and TWA director. He was one of the sons of Conrad Hilton (founder of Hilton Hotels).

Hilton was born in Dallas, Texas. His father was Conrad Nicholson Hilton, founder of Hilton Hotels, and his mother was Mary Adelaide (Barron). Hilton grew up with three siblings: William Barron Hilton, Eric Michael Hilton, and Constance Francesca Hilton. He was the great-uncle of Paris and Nicky Hilton, the latter sharing his nickname. He attended New Mexico Military Institute.

Hilton had an affair with his step-mother, Zsa Zsa Gabor, in 1944. He was Elizabeth Taylor's first husband (May 6, 1950 – January 29, 1951) with the marriage ending in divorce. In 1958, Hilton married oil heiress Patricia "Trish" McClintock. They had two sons: Conrad Nicholson Hilton III and Michael Otis Hilton.