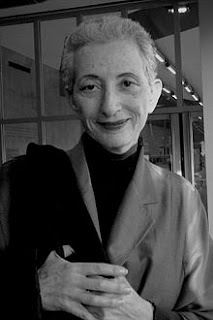 * Hélène Cixous turns 76 today (5 June 2013). Considered "one of the mothers of poststructuralist feminist theory," she has the Moon in the philosophical Sagittarian decan of Aries ruling her maternal/feminist Cancer Ascendant.

She has published widely, including twenty-three volumes of poems, six books of essays, five plays, and numerous influential articles.

Along with Luce Irigaray and Julia Kristeva, Cixous is considered one of the mothers of poststructuralist feminist theory. In the 1970s, Cixous began writing about the relationship between sexuality and language. Like other poststructuralist feminist theorists, Cixous believes that our sexuality is directly tied to how we communicate in society. In 1975, Cixous published her most influential article "Le rire de la méduse" ("The Laugh of the Medusa"), translated and released in English in 1976. She has published over 70 works; her fiction, dramatic writing and poetry, however, are not often read in English.

"The Laugh of the Medusa"?? Her T-square involves Pluto in Cancer opposite Jupiter in Capricorn with the Aries Moon at the apex. And Mars in Scorpio quincunxes and rules the Moon!