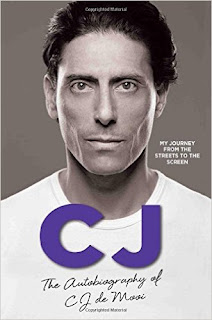 * CJ de Mooi is best known as a panellist on the BBC television show Eggheads. He adopted the name de Mooi when modelling; he translates it as Dutch for "handsome", though a more literal translation would be "the beautiful".

In his 2015 autobiography, de Mooi reveals that once upon a time he was a sex worker in London, and that he believes he once killed a man, after punching him and throwing him in a canal in Amsterdam.