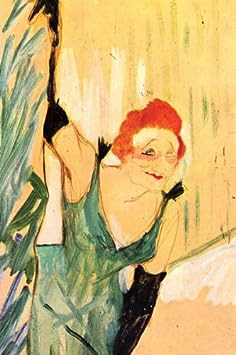 Born into a poor family as Emma Laure Esther Guilbert, Yvette Guilbert began singing as a child but at age sixteen worked as a model at the Printemps department store in Paris. She was discovered by a journalist. She took voice and acting lessons on the side that by 1886 led to appearances on stage at smaller venues. Guilbert debuted at the Variette Theatre in 1888. She eventually sang at the popular Eldorado club, then at the Jardin de Paris before headlining in Montmartre at the Moulin Rouge in 1890.

For her act, she was usually dressed in bright yellow with long black gloves and stood almost perfectly still, gesturing with her long arms as she sang. An innovator, she favored monologue-like "patter songs" (as they came to be called) and was often billed as a "diseuse" or "sayer." The lyrics (some of them her own) were raunchy; their subjects were tragedy, lost love, and the Parisian poverty from which she had come. During the 1890s she appeared regularly alongside another star of the time, Kam-Hill, often singing songs by Tarride. Taking her cue from the new cabaret performances, Guilbert broke and rewrote all the rules of music-hall with her audacious lyrics, and the audiences loved her. She was noted in France, England, and the United States at the beginning of the twentieth century for her songs and imitations of the common people of France.

She was a favorite subject of artist Henri de Toulouse-Lautrec, who made many portraits and caricatures of Guilbert and dedicated his second album of sketches to her. Sigmund Freud attended performances, including one in Vienna, and called her a favorite singer. George Bernard Shaw wrote a review highlighting her novelty.