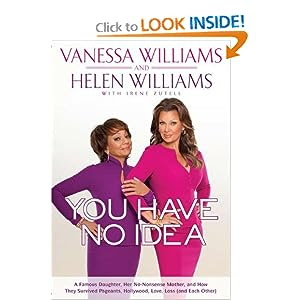 * In 1983, 20-year-old Vanessa L. Williams became the first African-American woman crowned Miss America, but a scandal arose when Penthouse magazine bought and published nude photographs of her. Saturn conjunct Venus in the 8th house can put great obstacles in the path of the most talented of beauties but these obstacles can, in turn, pave the way for well-deserved success. Williams relinquished her Miss America title and rebounded from this early setback by launching a career as a singer and actor, earning multiple Grammy, Emmy, and Tony Award nominations in the process. She is probably the most successful Miss America winner to have entered the entertainment field.

In their mother-and-daughter biography, Helen Williams writes, "On the front of Vanessa's birth announcement there's a drawing of a smiling baby girl wearing a big crown and holding a scepter. It reads, 'Here she is—Miss America.'" The book includes a photo of the prophetic baby card, showing Vanessa's middle name as "Lynne" and a birth time of 11:28 a.m. Due to copyright restrictions I won't publish this image but it can be viewed here on the Amazon Books website. Romy Ransom did brilliant work obtaining the same data, including the birth time, from Williams three decades ago in the early days of Williams' career.

Williams's first major film role was as the star of the feature film Eraser in 1996. She also starred in the movies Soul Food, Dance with Me, The Adventures of Elmo in Grouchland, Shaft and Johnson Family Vacation. From 2006 to 2010, she played the role of the scheming, self-absorbed diva and former supermodel Wilhelmina Slater in the ABC comedy series Ugly Betty, for which she received three Emmy Awards nominations. In 2009, Williams released her eighth studio album, The Real Thing. From 2010 to 2012, she starred in Desperate Housewives as spoiled rich woman Renee Perry. She starred in the supernatural drama series 666 Park Avenue in 2012.

BIRTH DATA: Vanessa Lynne Williams, 18 March 1963, 11:28 (11:28 a.m.) EST (+5), Millwood (?), New York, USA (41n12, 73w48). ASC: 9 Cancer. RR: AA (from quoted baby card reproduced in a biography). SOURCE: Sy Scholfield (©) quotes Vanessa Williams and Helen Williams, with Irene Zutell, You Have No Idea: A Famous Daughter, Her No-nonsense Mother, and How They Survived Pageants, Hollywood, Love, Loss (and Each Other) (New York: Gotham/Penguin, 2012), p. 73: "Vanessa was born ten days late on March 18, 1963, at 11:28 A.M., weighing seven pounds seven ounces, and measuring twenty inches." A photograph of Vanessa's baby card stating the same information appears on page 75 (view image here). Previously, Romy Ransom quoted Williams in person for the same data when Williams was a beauty contestant. Williams' place of birth has been given as Tarrytown, Millwood and the Bronx, all in New York state. Whichever of these places she was born in (or somewhere in between) does not change the Ascendant or Moon degrees.