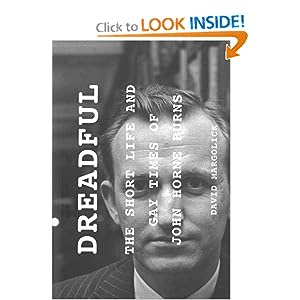 * John Horne Burns had Neptune rising at the very end of the 12th House at 5° Leo (Sabian Symbol: "rock formations at the end of a precipice"), ruling his Pisces Moon on the 8th cusp no less. He lived his life on the edge, too briefly and amidst controversy, and as a writer, transformed many of his darkest experiences into literature (Neptune is ruled by the Sun in conjunction with Mercury in the literary 3rd House). His critically-acclaimed first book, The Gallery (1947), is one of the first novels to unflinchingly depict gay life in the military (Uranus in Aquarius squares his Mars in Scorpio), but it was his only book to earn him praise. Ernest Hemingway summed up Burns' brief life as a writer thus: "There was a fellow who wrote a fine book and then a stinking book about a prep school and then just blew himself up." While ruling his ascending Neptune, Burns' Sun in Libra was itself ruled by Venus in the overly-critical first degree of Virgo in the 1st House. Sadly, he ended his days (and blew his talents) drinking to excess and complaining bitterly of critics, rivals, and both friends and enemies. WIKIPEDIA BLURB

John Horne Burns (October 7, 1916 – August 11, 1953) was the author of three novels. The first, The Gallery (1947), is his best known work, which was very well received when published and has been reissued several times.

Several publishers rejected The Gallery before Harper & Row published it in June 1947 and it became a best-seller. It depicted life in Allied-occupied North Africa and Naples in 1944 from the perspective of several different characters. Without sentimentality, Burns explored the average man's resentment of the military, his struggle to assert his individuality within the complex war effort, the tension between officers and enlisted men, the psychological effects of dislocation, economic and social inequality between the Americans and those they defeated, the experience of homosexual military personnel, and the popular life of Naples in 1944 under the Allied occupation. The title referred to the Galleria Umberto I, a shopping arcade in Naples through which several of the characters pass. The work was unconventional in structure, comprising portraits of nine characters interspersed with eight recollections narrated by an anonymous American soldier following a route much like the one Burns tracked. Though largely a series of sad and painful vignettes, Burns's narrator manages a modestly positive assessment near the end: "I began to think that something good might be salvaged from the abattoir of the world. Though in the main all national decency and sense of duty mighty be dead, I saw much individual goodness and loveliness that reassured me." In the words of Paul Fussell, "Burns relied on discontinuity, like a sort of prose T.S. Eliot, thus suggesting incoherence as a contemporary social characteristic." Major newspapers and authors including Ernest Hemingway and Edmund Wilson praised it. The Saturday Review called the novel "the best war book of the year".