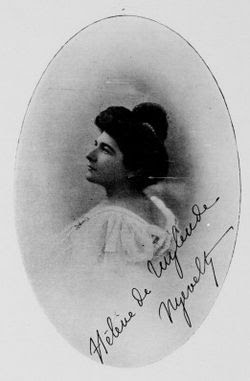 * Hélène van Zuylen (née de Rothschild) ― the first woman to compete in an international motor race (in 1898) ― had Mars high in the sky ruling the Aries Decan of Sagittarius on her Ascendant and Neptune in Aries on her IC.

Together with Camille du Gast and Duchesse d’Uzès Anne de Rochechouart de Mortemart, Baroness Hélène van Zuylen was one of a trio of French female motoring pioneers of the Belle Epoque. She entered the 1898 Paris–Amsterdam–Paris Trail using the pseudonym Snail, thus becoming the first woman to compete in an international motor race.

An only child, the daughter of Salomon James de Rothschild, she was disinherited for marrying a Catholic, Baron Etienne van Zuylen of the old Dutch noble family Van Zuylen van Nievelt. Thus, her childhood home, the Hôtel Salomon de Rothschild, was bequeathed to the French government by her mother. Her extensive refurbishments to the van Zuylen ancestral home Kasteel de Haar near Utrecht turned it into one of the foremost Gothic Revival castles in the Netherlands.

She was nicknamed La Brioche, and used the pseudonym Snail for motor racing whilst her husband, Baron Etienne van Zuylen, competed as Escargot (French for snail). In collaborations with Renée Vivien she used the nom de plume Paule Riversdale.