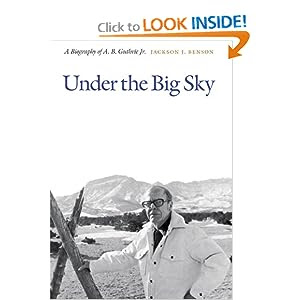 * A. B. Guthrie, Jr ― who won the 1950 Pulitzer Prize for fiction for his novel The Way West (about the journey of American expansion in the old west) ― had the North Node in the first degree of Sagittarius ruled by Jupiter in the same sign, being its own sign.

Alfred Bertram Guthrie, Jr (January 13, 1901 – April 26, 1991) was an American novelist, screenwriter, historian, and literary historian. The author called himself "Bud" because he felt that Alfred Bertram was "a sissy name."

His novels include Murders at Moon Dance, which was published during 1943. The Big Sky appeared during 1947, with a young person's edition during 1950. Guthrie continued to write predominantly western subjects, including the Academy Award-nominated script for the movie Shane during 1953 and the novel These Thousand Hills during 1956. During 1960, he published his first collection of short stories, The Big It and Other Stories.